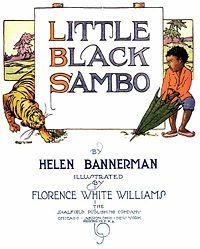 I have no doubt I may offend some readers here, but (shock!) I will write what I think. I mentioned that the other night on my evening commute as I thought about the question of ‘which book in the burning library would you save’ and whether this would be the book you find your favourite or the one to which you have an emotional attachment, I thought about my father’s Sunday School prize book. The book is called “Although he was black”

below a summary from Antiquarian Booksellers of America

ALTHOUGH HE WAS BLACK

1933. 2. BLACK INTEREST. ALTHOUGH HE WAS BLACK by Lucy Laing. Lond.: Nelson, nd, bookplate dated 1933. 8vo, pict. bds, [63]p., sl. soil, VG+. The story about a man who brings home a Black boy as a surprise servant for his two sons. The boy is named Sambo and talks in dialect and the book is replete with racism. By the end of the book, Sambo has managed to help the young boys who say: “he was one of the whitest fellows I ever knew although he was black!”

First of all, I’m a bit surprised that it is fetching so much on the market. For one thing, it is by today’s standards, very racist and secondly, because it was clearly written for the Christian market (hence being a Sunday School prize!).  Clearly,  I have an attachment to it because it was my father’s and the aforesaid Sunday School prize – and Buddha knows, I don’t think my father was closely aligned to the church for the rest of his life (he was a questioner!).  A reasonably average story for the time in which it was written – kindly white people rescue and offer salvation to lowly black person.   Beyond that, it made me think about other stories much loved in our family. I have bought a copy of ‘The Story of Lttle Black Sambo’ by Helen Bannerman for all my children and a few more. Now I read it to Small and she loves it – wide eyed at Sambo’s bravery in the face of ferocious hungry tigers. Is it racist? Some think so and it attracts intense reactions. I think it is certainly a product of it’s time and I think Helen Bannerman wrote a story of a very brave boy using characters and settings with which she was very familiar. I cannot detect any racism in that original text beyond the fact that she has called the boy Sambo and the illustrations are exaggerated. There is much dispute about the book but it seems clear that the original was not the biggest target for villification, rather it was the numerous copies and ‘knock offs’ of the story which developed the racist theme. You can read an interesting essay by Jim Pilgrim here http://www.ferris.edu/news/jimcrow/picaninny/
and I really do NOT like the sanitised version called Sam and the Tigers -Julius Lester, 1997.
Enid Blyton suffered similar castigation for the golliwogs in her stories – can you remember when the Noddy books were banned from your school library? Blyton’s comment was that really all that meant was that the sales of her books went up! And she vigorously defended any cruel intention towards black people and that she had written as many ‘good’ golliwogs into her stories as ‘naughty’ ones. Personally I think she’s far harsher on the lower class – associating them with laziness, stupidity and dishonesty. All that aside, consuming huge quantities of Enid Blyton as a child has not made me racist or irrationally intolerant to the ‘lower classes’. I resent stupidity no matter which social strata I encounter it in!http://www.dailymail.co.uk/news/article-1081815/Hate-mail-racist-Enid-Blyton-shop-owner-started-stock-golliwogs.html