Really we can never get enough of dinosaurs! Boys or girls, fiction or nonfiction, surely they must be one of the most eternally popular choices for kids’ books.

In our house this is most definitely true and we loved the crazy dinos shaking their booties and the boards on the disco floor. Lots of rhythm and rhyme and onomatopoeia abound as the dinosaurs salsa, moonwalk and even crump it up.  With so many different types of dinosaurs strutting their stuff the floor starts to really rumble but the very ground shakes with the arrival of a gate crashing T-Rex! Let’s hope he isn’t looking for supper!

The text also cleverly integrates some of those rather pesky long dinosaur names and luckily there is also a pronunciation guide for those of us who are not as able as five year olds to get our tongues around them.   To follow up the story some strange but true facts are also included making this book not only fun but educational.

Daron Parton’s illustrations of the decoratively dressed dinosaurs lend even more quirkiness to the story.

This is bound to be a favourite with many young readers and I’m sure there could be many impromptu disco sessions in your library after a reading.

Highly recommended for boys and girls aged around 3 to 8 years. 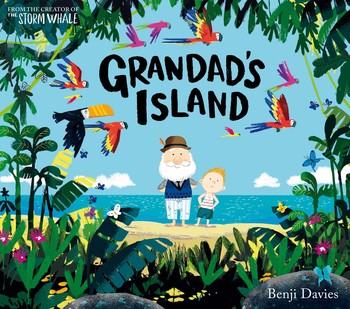 For many children, losing a grandparent is often their first experience with death and grief. The emotions of this may be openly expressed or may not be so visible to observers. Using a picture book to invite discussion on this topic may be very valuable for either individuals or classes.

There are many quality books that handle the topic of loss with sensitivity and the wise teacher-librarian will usually have quite a collection in order to be ready for the occasions when they are needed.

This new book by Benji Davies examines this topic with a beautiful and gentle grace as the close bond between grandfather and grandson and their final parting is described.  The colourful illustrations of his favourite destination underline the ‘perfect place’ in which Grandad chooses to stay and reassure Syd that Grandad will be happy there.

I also believe this would be an excellent choice to deal with the concerns a child might have about a grandparent going into a care facility.

Watch the book trailer to see a preview and find out more about the award-winning author here.

Renee Treml has presented another beautiful book for little ones with this re-working of an old nursery rhyme, Once I Saw a Little Bird; and given children a wonderful opportunity to hop, jump, flop and more as the rhythmic text unfolds.

Baby Australian animals romp throughout this board book and Renee’s illustrations are as always just delightful.

Simple but bound to be a favourite with tiny tots, we know a little babe who will love this one!

Highly recommended for little humans of your acquaintance – with Christmas coming up this would be perfect to pop into a Santa sack for someone small and special.

When one of the best loved characters from Australian children’s books is turned into a highly acclaimed and hugely popular TV series, you can expect the fun to just keep on coming!

And it does as a new series of Tashi books, based on the animated show (Flying Bark Productions) , hits the shelves.

Jack and Tashi are determined to win the Annual Fishing Competition but the Warlord has other (and more devious) ways of making sure that he ends up with the golden trophy.

Unfortunately, he doesn’t hold onto it for long and when it goes missing, Jack and Tashi need to solve the mystery. Along the way they manage to acquire a baby kraken and it can only be a matter of time before that infant’s mother comes looking for it.

Miss Small thoroughly enjoyed this story – just as much as she does the originals and the TV show and is looking forward to more.

As a delightful bonus, after the story there are several pages of engaging activities such as wordsearches, crosswords, quizzes, mazes and more created by the talented Meredith Costain.

There was great excitement today when the mail arrived with two more in the series. I know what will be on the reading agenda tonight!

With loads of colour, a great story and the activities these are sure to be winners with your readers from around 7 and up!

Tanith Carey  has had a long successful career as a journalist working with a wide variety of some of the world’s leading newspapers and journals. She is also a highly successful author of books particularly several related to parenting, the latest of which is Girls Uninterrupted.

Her work in this area has attracted high praise including endorsement by the likes of Steve Biddulph and her books translated into 12 languages to date.

As I am now working in an all girls’ college, I am seeing firsthand many of the issues which parents of teen girls face today so this book could not be timelier. It will certainly be one I will promote with our college community and parents.

This was firstly a series of articles in the New York Times and the resulting publication into a widely praised book is testimony to its usefulness.

As a grandmother now raising a ten year old granddaughter it will also be a ‘go to’ book for me as I help this little one become a Mighty Girl over the next few years.

Highly recommended for anyone who is in the challenging role of bringing up 21st century girls, whether parents/family or educators.

Little girls are always excited about their upcoming birthdays and the all-important party planning. Clementine Rose is no exception. She’s counting down the days with excited anticipation. Of course, deciding on the theme is most important and luckily she has Uncle Digby to help with that!

But Clemmie’s birthday is not the only big event in this newest adventure. Her friends Teddy and Mintie are delighted when a new puppy comes into their lives, the school sports carnival is on and poor little Lavender is not at well and has a trip to the vet. Lavender isn’t the only one who needs medical attention however and Clementine’s long awaited party looks uncertain when the little girl ends up in hospital for an emergency appendix operation.

Devotees of this series will enjoy the latest adventure with all this action happening and thankfully as always there is a redeeming happy ending.

For your younger readers who enjoy the ‘series’ following, you will be sure this one will be very popular. Perhaps you could arrange a Clementine Rose event for the fans in your readership as a library event. I feel sure there would be many takers!

Recommended for newly independent readers from around 6 and up.

I may well be one of the last to read The One and Only Ivan although I have heard all the fulsome praise for it since its publication.  And now what to say about a book that not only lives up to its hype and my expectations but exceeds them?

No reader could remain unmoved by this story of courage, dignity, intelligence and compassion. If only all humans could exhibit these traits as well as Ivan does.

For those who don’t know, Katherine Applegate’s novel about Ivan the captive gorilla, his long and bleak incarceration in a shopping mall with a ‘circus’ theme and his eventual freedom to the Atlanta Zoo is based on a true story. You can read more about it here at Zoo Atlanta.  Ivan’s history is a sad one but ultimately has a positive outcome which reflects what can happen when a community rallies together to redress an injustice.

Ivan’s fictional story will break your heart – and then heal it again – as Ivan moves from acceptance and resignation to his plight, to his fight for freedom as he vows to protect Ruby, a tiny baby elephant, newly arrived at the mall.

For over twenty years Ivan has lived in his solitary confinement with his only companions being other animals in the mall, most particularly Stella the elephant and Bob, an intentionally homeless dog. His best human friend is Julia, the daughter of the mall’s cleaner. Ivan is a natural artist and Julia connects with him with her own artistic efforts. But things change and the popularity of the mall’s animal exhibits and the ‘circus’ shows performed regularly begin to pall with customers. Mack, the owner, is determined to boost the centre’s attendance and when Stella begins to show signs of injury and aging, he snaps up a bargain buy from a bankrupted circus in the shape of tiny Ruby.   Ruby is comforted by Stella’s maternal presence but the old elephant’s health fails so much that combined with a lack of concern from Mack and no vet assistance, Stella dies and Ruby is left a defenceless infant again. And this is when Ivan begins his transformation into the silverback protector he has always been meant to be. His final promise to Stella to ensure Ruby has a happier fate than dying in a shopping mall cage, leads Ivan to discover his inner abilities and prove that anything is possible with determination and creativity.  His relationship with Julia and his own will to fulfil his vow achieve a remarkable and uplifting resolution.

Find a discussion guide here and check out the website here for more information about the book, the One and Only Ivan and the author.

I cannot recommend this book highly enough and have already earmarked it for a Readers Circle title in my new library. It is definitely on my ‘tiramisu’ book list!

This is certainly a very different sort of picture book. Though it is clearly intended for very young readers, there is some very sophisticated vocabulary within the text.

Sophia has an upcoming birthday. And her greatest wish is to have a giraffe as a present. She is a great planner so she comes up with what she thinks will be the perfect ‘pitch’ to achieve her goal. But as each attempt fails, she has to revise her thinking and regroup her thoughts. What is it that will make the difference between failure and success? Just one word is all it takes, Sophia discovers.

My Small definitely enjoyed it and particularly related to the illustrations which supported and clarified the text very well but we did need to take time to explain certain words.

That being said, I think, if this were shared in a classroom setting it would provide a perfect adjunct to discussions on careers/occupations and a good lead in to synonyms – even if not as complex as those used!

All in all it is a very joyous story – with a feel-good vibe to it. I just don’t want a request for a birthday giraffe as a result! 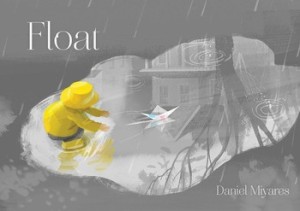 This is a beautiful textless picture book perfect for sharing with younger children. Seemingly very simple in its premise of a little boy using his imagination to make and sail a paper boat, the depth of the wonderful illustrations will provide much discussion.

A rainy grey day is transformed by the spark of this imagination and the vivid yellow of the boy’s raingear highlights this.  When his paper boat slips away from him and he goes looking for it, another adventure awaits him.

When you have shared and talked about this experience with your readers, of course you will be keen to make your own paper boats and sail them. The delicious endpapers give a visual instruction sheet on how to fold your own boat. Have fun and happy sailing!