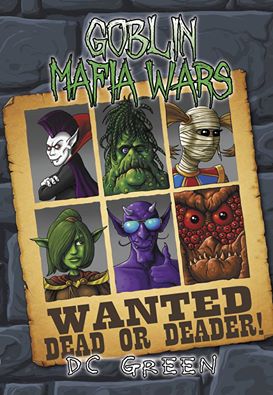 You would think that as a royal hume dude your life would be one of complete luxury not to mention stressfree. Think again! PT (Prince Thomas of Monstro City) and his Dead Gang friends are embroiled even deeper in nasty situations and deadly – or is that undeadly? – circumstances; their quest to find the eggs of the last dragon, Kalthazar,  as well as trying to avert complete goblin civil war and annihilation of all other species, thwarting the evil plans of the horrendous Dr Franken, removing the usurper Prince Robbie and just a few other issues.

Following the toxic altercation at Fire Mountain with the goblins’ attack and Kalthazar’s limping escape to the Isle of Giants, the Gang minus friend Zorg begin a trek which first of all sees them navigating through the Dead Zone. Yowsers! This is one extremely bogus territory where even monsters like the Dead Gang are in very real danger of being exterminated – not least of all by their erstwhile compadre Scarab, the super-strong mummy gal.  She’s kind of ticked off about Zorg and decides that PT in particular is totes responsible.

Surviving this and then a very unnerving train ride back to Monstro City, the Dead Gang faces yet more monstrous mayhem. While PT manages to conduct some very delicate negotiations– and some highly skilful bluffing – with the rival goblin factions (think Sopranos style goblins!), his plans are sabotaged by the appearance of a chocolate popcorn gobbling older/younger idiot savant (without the savant) brother Prince Robbie. Rumour has it he has been cryogenically preserved by famous Dr Franken for the past ten years and not in fact stolen by the Vampire Queen. Looks like vampiric Stoker is not PT’s brother after all – or is he?

And just what is Dr Franken’s dastardly involvement with the goblin factions and the mentally deranged Prince Robbie? How did he get that dragon egg? And what the web is with all those freaky arms? Trapped in small cages in the evil doctor’s ‘hospital’ things look grim for this grimmest – and often grimiest- of gangs, with no apparent hope of escape. Spoiler alert – yet they do along with an about-to-hatch dragon egg!

DC Green has provided readers with another rip-snorter yarn about these highly idiosyncratic monster teens who have their own methods of solving problems. Their combined abilities and wacky take on situations along with their staunch support of each other prove more than a match for their adversaries.

High humour rating and all the excitement of fast-paced action will prove yet again to be a winner with readers from around 12 and up.

If you missed the first volume you MUST go and get it! Can’t wait for the next instalment – write faster DC!

Oh and PS – completely buzzed about that quote on the back cover!!