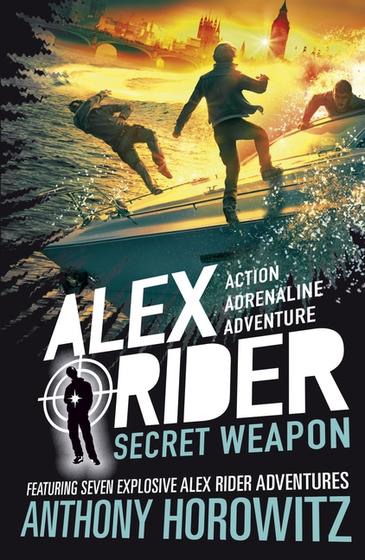 I’m pretty certain that I’m not the only one who’s so excited that Anthony has his Alex mojo back J – and with the talk of the forthcoming movie there are bound to be many more readers added to the fold of fans.

In this new volume, seven adventures are recounted – making them perfect read-alouds for book talks or encouraging reluctant readers. I’m finding at present that as many girls as boys are borrowing the series (especially since I bought the new editions with the stunning cover art!). Since this collection includes three brand new adventures it will have as much appeal to existing fans as to those new to the series.

Whether it’s playing the part of assassin unknowingly, having a routine dentist visit turn into something far more sinister or skiing down steep slopes in a frantic attempt to save himself and others, Alex the reluctant spy manages to come out on top, largely thanks to his uncle’s dedication to bringing him up with the skills he would need.

Anthony Horowitz does thrilling suspense so well – as we know not only from his books but also his plethora script writing ventures. I know I’m not alone in my addiction to Midsomer Murders and Foyle’s War!

As an introduction for the next generation of devotees or to add some excitement to your existing AR readers – this is a must have for your collection.