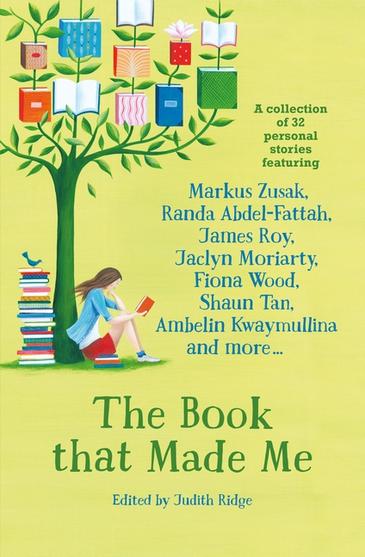 Australian RRP: $19.99
New Zealand RRP: $22.99
Although the publishers suggest an age range of 14 up I feel that it is going to be adults who will enjoy this most. Judith Ridge has compiled a wonderful collection of anecdotes from thirty-two of Australia’s leading storytellers.  Each describes the impetus for them becoming readers and indeed writers with many engaging childhood memories or reminiscences of that moment when a book transformed the reader.

Some of us have been gobbling up books since the age of three but others have come later and by various paths. For booklovers this is a delightful retreat into the thoughts of other avid readers. And it is not just the aspect of reading that I found fascinating. For instance, when I read Simon French’s piece (I have always admired his writing) I felt immediately connected when he told of his father being a wireless operator in a Lancaster bomber based in the north of England – as was my dad. I wondered if the two fathers had known each other and then marvelled that both of them survived what was the most dangerous role in Bomber Command.

Of course it was also resonant to read of shared ‘book loves’ such as Kate Constable describing her passion for ‘Tom’s Midnight Garden’ (Phillipa Pearce) – these are the threads that bind us together as humans.  Alternatively, reading of someone’s great love of a book such as Emily Maguire’s choice – Grand Days by Frank Moorhouse – which made me think “I should try that out.”

Some of these pieces are amusing, some serious, some lyrical, some more prosaic but all are truly engaging. Shaun Tan’s quirky illustrations between each offering are both funny and apt.

Some of our girls in secondary book club might enjoy this but I have no doubt that it will be most popular with our avid reader staff.  And aside from the joy of the reading, knowing that the royalties will go to the Indigenous Literacy Foundation is a huge incentive to add this to your collection.