Classic Morris Gleitzman! And pure unadulterated joy! In these parlous times when politicians behave without regard for those they are sworn to represent this could not be more timely or indeed, pointed.

Ludo is a helper. A year after losing his mother his desire to help and his commitment to the values of being a true Scout remain firmly fixed in place. When his father wins a seat as an independent MP and the pair move to Canberra Ludo begins to see that politics, the people embedded in the system and the nation’s capital are all far from being the selfless ideal he had in his mind. His zeal for helping the homeless people in the capital quickly escalates into a mission with much wider implications. Along the way he is able to recruit like-minded allies, not least of all, his dad.

Ludo is a very likeable protagonist and never becomes priggish which could so easily have happened with a lesser creator. His warmth and compassionate nature are a lodestone throughout the narrative which readily endears him to the reader.

With Morris’ usual deft touch the gravity of some nasty situations is liberally leavened with a good dash of humour as well as some moments of real poignancy. Quirky characters as well as unsavoury ones are sprinkled throughout making this an engaging read with some very important underlying themes.

Not only do I believe this would be a novel which could be used to great effect with students but I do think it should be mandatory reading for every single elected member – perhaps it could be a requirement of their introduction or even better, preselection process?

Highly recommended for either independent reading or read-aloud for children from about eight years upwards.  Kudos to Morris for a fantastic and apt new book! 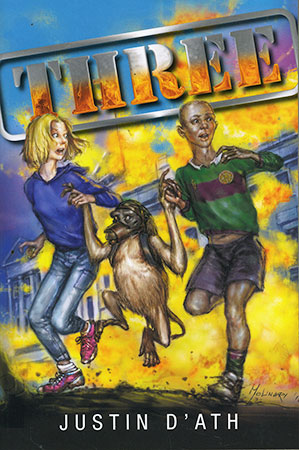 Justin D’Ath seems to have a real gift for exciting adventure stories with tremendous appeal to both boys and girls. This novel is like a blockbuster thriller movie but for young readers and is just fabulous.

Sunday or Sunny suspects nothing more than the usual school assembly as he and his mates stand out in the quadrangle of his International School. In fact, he doesn’t have much on his mind apart from his football and the birthday card he has for his American (girl) friend.

But when your father is the President of African nation Zantuga and you are next in line, there is no telling what might happen.

As the kids all line up there is a sudden commotion when ‘secret service’ guys pop up right next to Sunny and a weird looking baboon jumps on top of the outer wall. Baboons can be dangerous enough but a baboon that carries a photo and has strangely piercing eyes even moreso.

Within the space of breathtaking minutes Sunny finds out both his father and mother have been assassinated and his own life is in danger. It is in fact, the baboon that is meant to be his killer.

Car chases, gun fights and conspiracy follow at rapid pace. It is an odd thing that Sunny and the baboon become companions. Three is not a baboon but a ‘brid’ (hybrid) and to Sunny’s astonishment he can speak and understand humans.  With the secret help of his girlfriend who is dealing with conspiracy dealings in her own family, Sunny eventually finds safety and sanctuary and Three, the brid who is as much a victim as anyone else finds peace.

I loved this book. The twists in the plot were believable and exciting. The subtle commentary on politics and backroom deals all too true-to-life and the underlying ethics of animal experimentation are terrific.

My only small complaint has to be the cover art. I’m no artist for sure but felt that the cover does not do the book or its story justice at all. I am urging my girls to ignore the cover and try out the book.

Highly recommended for readers in Upper Primary to Middle Secondary.