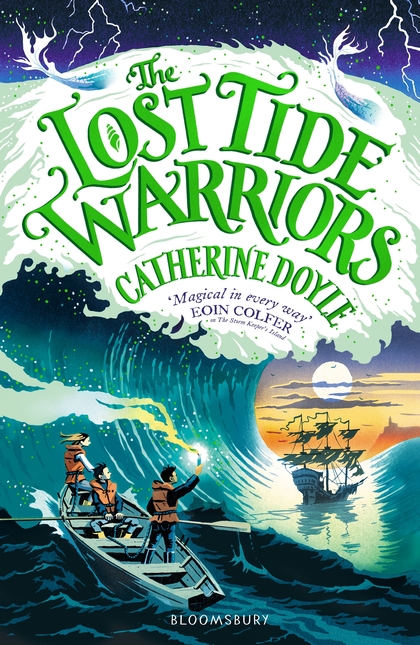 The first in this trilogy The Storm Keeper’s Island was a fantastic read and this sequel equally stacks up in the page-turning excitement department.

Fionn Boyle is now six months into his acknowledged role as the new Storm Keeper of Arranmore and is in the depths of despair. Despite his heritage as the true descendant of Hughie Rua, who was imbued with the magic of the legendary Dagda, powerful sorcerer of eons ago, not to mention the magic that crackles within his own grandfather, the old Storm Keeper, he cannot summon his own powers. And time is running out, as his frequent nightmares keep reminding him. The evil witch, Morrigan, is preparing to rise again and when her minions, the dreadful Soulstalkers, begin to swarm onto the island Fionn knows that the time for her resurrection is imminent. How can Fionn possibly fulfil his role as Storm Keeper and keep the island safe when he can’t even use his supposed magic?

But Fionn hasn’t yet realised that the overthrow of evil is not always the responsibility of just one hero. It is often the case that such success is the result of a coming together of community and family. With his friends, Sam and Shelby, in particular along with his family – Grandad, Mum and even Tara – and the combined strengths of the Arranmore islanders, Fionn can lead a strong defensive resistance to Morrigan and her followers, especially if they can secure Hughie Rua’s sacred shell, the Tide Summoner, and call the ferocious Merrows from the sea to their aid.

Once again Doyle has crafted a spell-binding narrative with many plot twists and thrilling episodes. These narratives put me in mind so strongly of both Alan Garner and Susan Cooper, both of whom took traditional legends of their locales and wove them effortlessly into contemporary fantasy-adventures.

I am completely in love with this series and look forward very much to the third. This comes with my highest recommendation for readers from around ten years upwards who relish exciting fantasy-adventures with very well defined characters and awfully nasty villains.

What a simply sparkling debut novel! It did take me two nights rather than my usual one (but I confess a little tiredness even after a week of holidays) but it was simply page-turning and thoroughly engrossing.

Fionn Boyle and his older sister Tara are going to Arranmore Island for the summer to stay with their paternal grandfather.  Tara, who is thirteen and has turned into a right little cow since her birthday, has been for a visit the previous summer but for Fionn it is his first experience of his ancestral home and his first encounter with his rather odd grandfather.  Fionn has plenty of time to become acquainted with his grandpa though as Tara has cut him right out while she aids and abets her ‘boyfriend’ Bartley (a thoroughly poisonous toad) in his quest to discover a long hidden secret.

That secret is to be a huge part of Fionn’s initiation into true island acceptance, and in fact his true inheritance, and that doesn’t just refer to the inhabitants. From the first day Fionn is bemused and intrigued by the overwhelming and obvious existence of magic running throughout almost every aspect of the island. He cannot ignore it as it keeps appearing in one form or another often when he least expects it.

Doyle’s plot has twists and turns a-plenty keeping the reader fully engaged with the very believable characters as they intertwine in past and present. In style and concept it reminds me of the masterful work of Alan Garner, blending mystical legend, magic and contemporary reality and, much like Garner, Doyle has taken a locale and its history well-known to her and woven a narrative that could well become a modern classic.

I really relished every word of this and look forward to reading her future work.

Very highly recommended for readers from around ten years upwards.