Hands down, this is the funniest and most enjoyable YA novel I’ve read in ages! Naturally, the super stunning cover is a real drawcard but when I tell you that I’ve ripped through it over just the last couple of nights, you can guess it was just a joy!

Alex Heck really doesn’t like St Mary’s. After her mother floated off to a Buddhist retreat and her parents’ divorce was finalised, her dad shipped her off to his old boarding school in record time. Now in her junior year she’s racked up more visits to the principal’s office than anyone on campus and seemingly, about to be expelled for her latest contretemps (out after curfew visiting a boy’s dorm room). Really, she couldn’t be more pleased about that result but she hasn’t calculated on Father Hughes, principal, calling in her dad who, as it happens was at school with her major adversary, and suddenly her imminent expulsion is off the cards again. Alex riles up even more than her usual bolshie style suggests and determines that one way or another she WILL get herself expelled. Given her strident feminist principles she devises the perfect plan. She will produce the first St Mary’s performance of The Vagina Monologues. Alex is pretty certain that the word ‘vagina’ alone will be enough to bring her plot to fruition. But somehow the whole exercise becomes more than just shocking the nuns and priests and circumventing the strict rules enforced by the very conservative school.

Alex’ interactions with her sweet room-mate, Mary Kate, her burgeoning relationship with hockey player Pat (she HATES sports jocks!), her ongoing scorn of Katie Casey, President of Save Your Heart (the club for promoting abstinence) and the way she is the ‘go to’ person for all the girls with problems in her dorm hall are pure hilarity. Somehow, her purple lady-fauxhawk, piercings and tat, vegan leather jacket and tough motorcycle boots just cannot withstand the growing certainty that she is becoming an integral part of the St Mary’s community and far from feeling frustrated at not achieving her goal, she discovers that she can make a difference and that there is strength in numbers.

This is just a delightful romp through themes of the importance of good friends, not judging on appearances and finding your own voice, as well as joining voices with unexpected supporters. There is a liberal use of strong language and frequent sexual references so for most of us this means this will need to be a Senior Fiction title only but truly it deserves to be read and enjoyed by many teens determined to find their own identity and place in their world.

My highest recommendation for this thoroughly entertaining and thought-provoking novel for readers from around 15 years upwards. 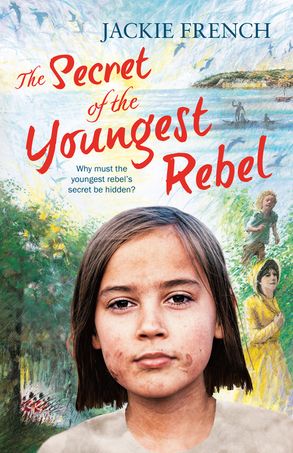 If you have not yet set about acquiring Jackie’s enthralling Secret Histories series it is definitely time to catch up to it. As this school year peters out and we limp towards the finish line, some are already thinking about 2019 and our support of our classes.

For the past two years I have shared Birrung the Secret Friend with our Year 4 classes to build their field of knowledge before their First Contact HASS studies. In particular this first in the series addresses directly their inquiry into short- and long-term effects of European settlement on the local environment and Indigenous land and water management practices.  Not only were the students completely engaged with the narrative with much lively discussion, prediction and astonishment (“the piece of meat was HOW big?”) but were already well prepared for their unit of work and receptive to even more delving into history.

Joyfully many of them have continued on with the series and love to tell me which one they have just read and recount the highlights. They all certainly love following the continued story of Barney and Elsie.
Now the series has moved onto to the early 1800s and Sydney Town has developed into an actual town although with dubious quality and is not the only growing settlement. While Barney and Elsie have now built their farm and are happily thriving out at Parramatta things are far from stable in the colony. The recent influx of Irish rebels transported for their part (whether actual or assumed) in the Vinegar Hill uprising has added an extra layer of fomenting discontent in the new colony where poverty, cruelty and injustice abounds. One small orphan, just one of many, is caught up in this. Frog has never known a mother or father and is, instead, a pickpocket in the rather dubious care of a slatternly innkeeper. When young Frog encounters both Elsie Bean and one Phillip Cunningham, momentous events are set in place.

The Castle Hill uprising was an unsuccessful attempt to redress the balance of justice in the corrupt environment of the colony despotically ruled over by such (now) dimly viewed personalities as Governor King, Rev Marsden and the local rabble of soldiery. Betrayed by spies the convicts’ rebellion is not only thwarted but cruelly crushed with merciless reprisals.

Frog, hero worshipping Cunningham, casts the die and joins the rebels, as a small but determined supporter and is injured in the skirmish. Rescued by Barney Bean, Frog’s future unravels into something not to be dreamed of – with the littlest rebel’s deepest secret revealed.

The twist in the tale is brilliant and little Frog, unloved and unwanted, finds a family worth having and along with them moves forward to building the colony into a bigger and better place for all-comers.

This is a story long untold and Jackie French, with her passion for Australian history, has revealed it to readers through her intensive research into eyewitness accounts as well as her imagination.  I for one, cannot wait to introduce this to my students as their next foray into the troubled history of our country. Their fierce sense of justice will be inflamed by the story and they will love to hear the next episode of Barney and Elsie and their growing family.

As if you can’t tell, I cannot recommend this highly enough. Aside from its readability it is easily one of the most valuable adjuncts to teaching primary children real history.

Recommended for readers from around eight years upwards.