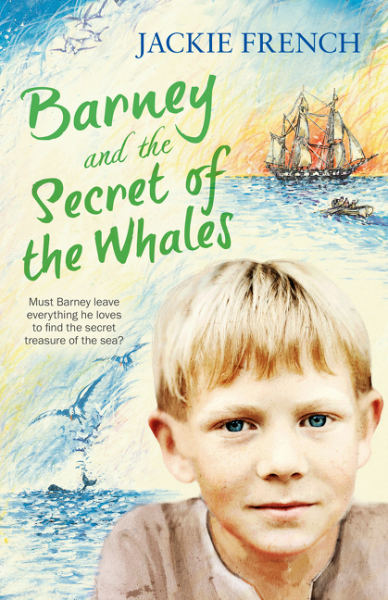 Is there any other author who has such a deft hand at bringing Australian history alive for young readers as Jackie French?

It appears this much –loved and well-respected writer is unsurpassed in this particular genre (not to mention all her other writing!).

The second instalment in the The Secret Histories series re-introduces the reader to young Barney. The boy’s mother was a convict but she sadly died like so many on the perilous journey of the First Fleet and Barney, being a free person but a child, would still be at risk if not for the generosity of the Johnsons who have taken him to their hearts.

In these early days of the colony, life for so many can be harsh and surviving can be fraught. Accruing any kind of wealth is almost unheard of as the newly founded settlement lumbers along.

Then an exciting visitor named Captain Melvill turns up and brings with him tales of great adventure and the lure of riches to be had from whaling.  Barney is not greedy by any means but he knows that one day the Johnsons will return to England and he along with his little friend Elsie will need to make their own way in New South Wales. If he can go whaling it would mean the opportunity to earn the stake money for a small farm for them.

Life on a whaling ship as a boy is tough and often hard but it is not that which makes Barney heartsick. It is the cruelty of the killing of one of the most magnificent animals he has ever encountered. The hunting of sperm whales with the riches they bring to men revolts Barney to a point of misery.  Fortunately after just one hunting expedition Barney is able to return to his peaceful home.

For lovers of history this examination of a little known aspect of the early European settlement in Australia is fascinating. For students who are inquiring into such history it is vital to my mind. No longer can we gloss over the less honourable events in our country’s history.

Highly recommended for all readers Year 4 and up.